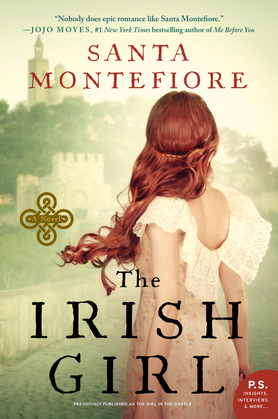 The Girl in the Castle

Two girls on the cusp of womanhood. A nation on the brink of war.

Read their story — and see why JOJO Moyes says that "Nobody does epic romance like Santa Montefiore."

Born on the ninth day of the ninth month in the year 1900, Kitty Deverill grows up in Castle Deverill, on the sunning green ghills of West Cork, Ireland — the same place her ancestors have always dwelled. She isn't fully Irish, as the son of the local veterinarian likes to tease her; but this doesn't stop Kitty and Jack O'Leary from falling in love...

Bridie Doyle, daughter to Castle Deverill's cook, cherishes her friendship with Kitty. Yet she can’t help dreaming of someday having wealth, having glamour, having... more. And when she discovers Kitty's darkest secret, Bridie finds herself growing to resent the girl in the castle who seems to have it all.

As Irish and British forces collide in Southern Ireland, Jack enlists to fight — and Kitty throws herself into the cause for Irish liberty, running messages and ammunition between the rebels. But , her allegiance to her family and her friends will soon be tested... and when Castle Deverill comes under attack, the only home and life she’s ever known are threatened.

A powerful story of love, loyalty, and friendship, The Girl in the Castle is an exquisitely written novel set against the magical, captivating landscape of Ireland — perfect for fans of DOWNTON ABBEY and KATE MORTON.

Previously published as The Girl in the Castle