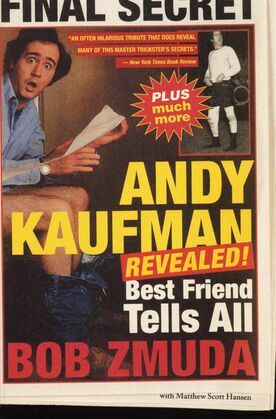 Best known for his sweet-natured character Latka on Taxi, Andy Kaufman was the most influential comic of the generation that produced David Letterman, John Belushi, and Robin Williams. A regular on the early days of Saturday Night Live (where he regularly disrupted planned skits), Kaufman quickly became known for his idiosyncratic roles and for performances that crossed the boundaries of comedy, challenging expectations and shocking audiences. Kaufman's death from lung cancer at age 35 (he'd never smoked) stunned his fans and the comic community that had come to look to him as its lightning rod and standard bearer.

Bob Zmuda -- Kaufman's closest friend, producer, writer, and straight man -- breaks his twenty-year silence about Kaufman and unmasks the man he knew better than anyone. He chronicles Kaufman's meteoric rise, the development of his extraordinary personas, the private man behind the driven actor and comedian, and answers the question most often asked: Did Andy Kaufman fake his own death?