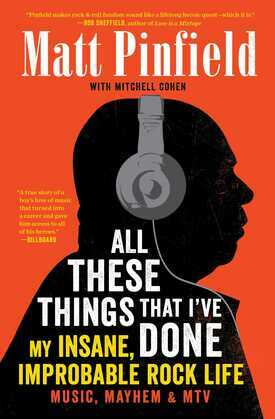 All These Things That I've Done

“The most trusted opinion in rock music” (Billy Corgan, The Smashing Pumpkins), Matt Pinfield offers the ultimate music fan’s memoir, an “entertaining and insightful” (Clive Davis) chronicle of the songs and artists that inspired his improbable career alongside some of the all-time greats, from The Beatles to KISS to U2 to The Killers.

Matt Pinfield ?makes rock ?n? roll fandom sound like a lifelong heroic quest?which it is? (Rob Sheffield). He?s the guy who knows every song, artist, and musical riff ever recorded, down to the most obscure band?s B-side single on its vinyl-only import EP. As a child, Pinfield made sense of the world through music. Later, as a teenager, Pinfield would approach his music idols after concerts and explain why he loved their songs. As an adult, rock music inspired his career, fueled his relationships, and, at times, became a life raft.

In this ?charming, rambling account of a life saved by rock ?n? roll...Pinfield is a disarmingly likable guide? (Kirkus Reviews) through his lifelong music obsession?from the heavy metal that infused his teenage years, to his first encounters with legends like Lou Reed and the Ramones and how, through his MTV years, he played a major role in bringing nineties alt rock mainstream. Over his long career Pinfield has interviewed everyone from Paul McCartney to Nirvana to Jay-Z, earning the trust and admiration of artists and fans alike. Now, for the first time, he shares his five decades of stories from the front lines of rock ?n? roll, exploring how, with nothing more than passion and moxy, he became a sought-after reporter, unlikely celebrity, and the last word in popular music. Featuring a rousing collection of best-of lists, favorite tracks, and artist profiles, All These Things That I?ve Done ?is an excellent read? (Publishers Weekly) about how a born outsider wound up in the inner circle.