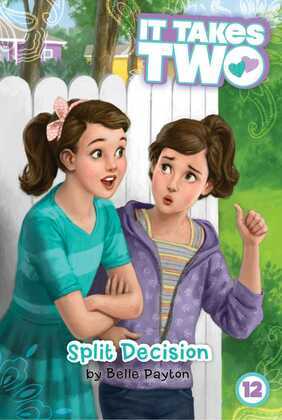 Alex and Ava are giving each other the serious silent treatment in the twelfth book of the It Takes Two series.

After Alex and Ava see star Ashland Tigers quarterback PJ Kelly coming back injured from a dirt-biking trip—which is totally against the team’s rules—they’re at odds about whether they should tell Coach. Ava thinks Coach needs to know what’s going on with his star player, but Alex doesn’t want the twins to get in trouble themselves for being somewhere they weren’t supposed to be. Plus, Coach’s team is already starting to shrink because people are worried about football injuries.

The twins’ clash has them giving each other the silent treatment…which means Ava’s not there to help Alex figure out why her crush, Corey, is acting so weirdly toward her! It may have something to do with the fact that Ava’s been wearing Alex’s coat around town…

Can Alex and Ava come to a decision that doesn’t hurt their dad’s team, or are they no longer twindivisible?