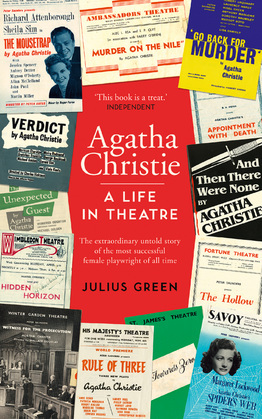 Agatha Christie: A Life in Theatre: Curtain Up

A revealing and witty new examination of how Agatha Christie became the world’s most successful and popular female playwright, including details of never-before-published scripts and stories.

Agatha Christie is revered worldwide for her books and her many film and TV adaptations. Less well-known today is her extraordinary repertoire of stage plays that firmly established her as the most successful female dramatist of all time.

Now Julius Green raises the curtain on Agatha Christie’s towering contribution to popular theatre, from her first serious attempts at playwriting – in a very different style to the whodunits for which she became famous – to her record-breaking achievements in the West End and her conquest of Broadway. Astonishing revelations about this often disregarded side of her life are illustrated with extracts from hitherto unknown plays, deleted scenes from her theatrical classics, and unpublished private letters, including her extensive correspondence with the legendary ‘Mousetrap Man’, theatrical impresario Sir Peter Saunders.