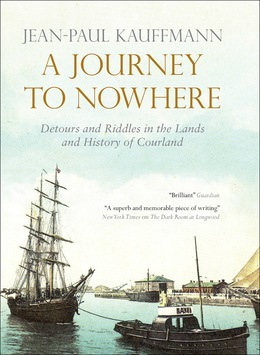 A Journey to Nowhere

Courland is an entity that no longer exists. With the Gulf of Riga to the north, the Baltic to the west and Lithuania at its southern border, and now part of modern Latvia, the region was by occupied by Nazi Germany and returned to Soviet Russia after the war, remaining largely inaccessible until 1991. Once ruled by descendants of the Teutonic Knights, it is now a nowhere land of wide skies and forests, deserted beaches, ruined castles and ex-KGB prisons. For years Jean-Paul Kauffmann has been irresistibly drawn to this place, the buffer between the Germanic and Slav worlds. His digressive travels at the wheel of a Skoda become an investigation into the whereabouts of a former lover, a search for an excavator of tombs, and he follows in the footsteps of Louis XVIII, for whom Courland was once a place of exile.

Author of Voyage to Desolation Island and The Dark Room at Longwood, which won six prizes on its publication in France, Kauffmann has come to be known as an erudite and witty observer of the world's most desolate reaches.