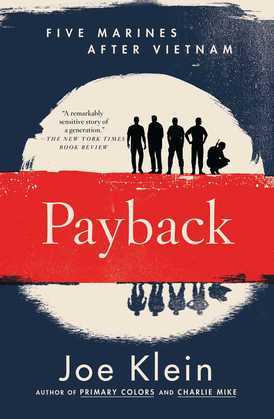 From the author of Primary Colors, “a remarkably sensitive story of a generation” (The New York Times Book Review): The critically acclaimed true story of five Marines who fought together in a bloody battle during the Vietnam War, barely escaping with their lives, and of what happened when they came home.

In 1981, while the country was celebrating the end of the Iran hostage crisis, an unemployed Vietnam veteran named Gary Cooper went berserk with a gun, angry over the jubilant welcome the hostages received in contrast to his own homecoming from Vietnam, and was killed in a fight with police. In what has been called “the most eloquent work of nonfiction to emerge from Vietnam since Michael Herr’s Dispatches” (The New York Times), Joe Klein tells Cooper’s story, as well as the stories of four of the other vets in Cooper’s platoon.

The story begins with an ambush and a grisly battle in the Que Son Valley in 1967, but Payback is less about remembering the war and more about examining its long-term effects on the grunts who fought it. Klein fills in the next fifteen years of these Marines’ lives after they return home, with “the sort of fine and private detail one ordinarily finds only in fiction” (People). The experiences of these five men capture the struggles of a whole generation of Vietnam veterans and their families. Klein’s “near-hypnotic” account (Daily News, New York) is, to this day, both a remarkable piece of reporting and “some of the most vivid, harrowing, and emotionally honest writing to come out of Vietnam” (The Washington Post Book World).