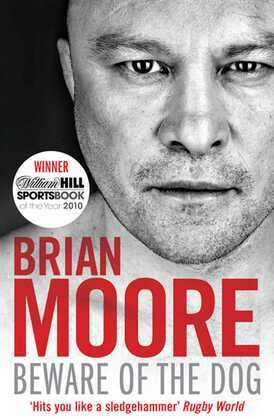 Beware of the Dog

WINNER OF THE 2010 WILLIAM HILL SPORTS BOOK OF THE YEAR PRIZE.

Brian Moore, or 'Pitbull' as he came to be known during nearly a decade at the heart of the England rugby team's pack, established himself as one of the game's original hard men at a time when rugby was still an amateur sport. Since his retirement, he has earned a reputation as an equally uncompromising commentator, never afraid to tell it as he sees it and lash out at the money men and professionals that have made rugby into such a different beast.

Yet, for all his bullishness on and off the pitch, there also appears a more unconventional, complicated side to the man. A solicitor by trade, Moore's love of fine wine, career experience as a manicurist and preference for reading Shakespeare in the dressing room before games, mark him out as anything but the stereotypical rugby player and in Beware of the Dog Moore lays open with astounding frankness the shocking events, both personal and professional, that have gone towards shaping him over the years.

Presenting an unparalleled insight into the mind of one of British rugby's greatest players and characters, Beware of the Dog is a uniquely engaging and upfront sporting memoir, and a deserved winner of the William Hill Sports Book of the Year prize.