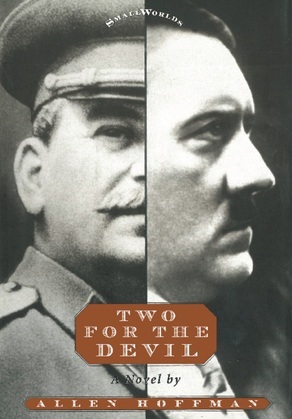 Two for the Devil

by Allen Hoffman (Author)
Fiction Historical 20th century (<1945)
EPUB
Unlimited loans, One at a time
Details
This searing third novel in the critically acclaimed Small Worlds series records the cruel fate of the villagers of Krimsk as they encounter the twentieth-century's greatest agents of evil, Joseph Stalin and Adolph Hitler.

It is Rosh Hashanah — the Jewish New Year and Day of Judgment — in Moscow during the Stalinist purges of 1936. In the Lubyanka secret police prison, senior investigator Grisha Shwartzman masterfully pursues the rigorous logic and obsessive legalism of the Soviet witch-hunt. Facing an extraordinary prisoner, Grisha realizes that the Soviet system he has faithfully served is murderously corrupt and that he himself will be the next victim — but not an innocent one. In despair, he flees to his home, where his deranged wife and an unexpected Rosh Hashanah letter from his father-in-law, the enigmatic Krimsker Rebbe in America, await him. The Day of Judgment proves to be a startling experience as Grisha, the once idealistic radical, judges himself, accepts his responsibilities, and is guided to sublime passion and possible redemption by his mad wife, who for twenty years has been patiently awaiting him in a closed wardrobe.

In 1942 a train of imprisoned Jews leaves the Warsaw ghetto for "resettlement in the East." It is Yom Kippur — the Day of Atonement and the holiest day of the Jewish year. In a crowded cattle car stands a lonely, defeated individual who is ashamed that he cannot even remember his own name. During the tortuous journey Yechiel Katzman will overhear a talmudic debate and meet a dull-witted giant who turns out to be none other than Itzik Dribble, also from Krimsk. As they arrive in the death camp of Treblinka, Yechiel remembers not only his name but also the Krimsker Rebbes prophetic curse that exiled him from Krimsk forty years earlier. Yet as death approaches, that curse will prove a blessing.

Stalin and Hitler decree certain death, but Grisha and Yechiel discover Jewish fates. The devil incites loneliness, degradation, despair, and even complicity; through memory, the victims elicit community, dignity, and the awareness of sanctity. Grishas "Soviet" Rosh Hashanah and Yechiels "Nazi" Yom Kippur are truly "Days of Awe." Even when death is certain, life can be lived.