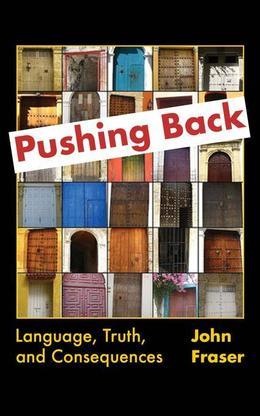 Pushing Back: Language, Truth, and Consequences

Pushing Back pushes back against GBTs (Great Big Theories) that confine literary discourse, especially poems, to zones where realworld truth-testing and value-judgments are told, "Keep Out; This Means You." Fraser steers between the Scylla of transcendent insights obtained courtesy of Metaphor, Image, and Symbol, Inc., and the Charybdis of literary language sucking its own pretensions down into the Void. A disrespecter of fixed categories and dichotomies himself, he shows by a variety of means how a functional looseness and local precisions, grounded in realworld experiences and the speaking voice, are a defence against implosion and collapse..

In an opening set of four articles, he looks, with an abundance of examples, at the workings of so-called ordinary language and the satisfiable hunger for plenitude, communality, and emotional substance. After which, the topics that he touches on include MallarmÃ©, Hopkins, Woolf ( kinesthetic richness), Stanley Fish and Northrop Frye (ungood), Yvor Winters and F.R. Leavis (good), Symbolism and Genius (proceed with caution), Descartes and Swift (Enlightenment energies), and GÃ©rard de Nerval (psychological brilliance, and "classical" clarity, as celebrated at a Martian conference).

In the last part of the book, going on from points in the Introduction, Fraser conducts a guerrilla campaign against old-world nihilism, whoopy-doopy Silicon futurism, and simplistic ideas of Truth, and reaffirms the importance of political engagement. Shakespeare, Borges, Pound, Fenollosa, the Glub, and sub-Saharan African art are among the guest appearances. Plus a few recollections about his dealings with theory as graduate-student 'zine editor and, years later, seminar-giver.