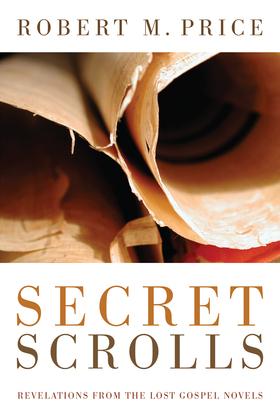 Secret Scrolls is the very first examination of some forty novels in which someone discovers a new gospel. Sometimes it turns out to be a hoax; will it be debunked before it can work its mischief? If it proves genuine, will it be brought to light? Or will corrupt church officials manage to prevent it?
The book evaluates what each author has to say about historical Jesus scholarship or New Testament research in general. Sometimes the authors have done their homework; other times they haven't bothered, and they wind up dishing up crazy rewrites of history and outlandish theories.
These novels deal with abiding issues of faith, even without some new discovery. As soon as one engages in biblical apologetics, one has stepped onto the marshy ground of probabilistic arguments, an entirely different epistemology that automatically replaces simple faith. And so one comes to hold one's religious convictions more tentatively, having become genuinely vulnerable to new evidence. One may not remain a believer for long. On the other hand, one invites fanaticism if one's faith is dangerously predicated on the assurance that no new discovery will send one back to the drawing board.
Secret Scrolls assesses what each author imagines it would take to derail and debunk Christianity. How mighty a blow must be dealt before the religion would fall? Dan Brown's notion that a married Jesus would debunk the Nicene Creed is laughable.
As Wilbert Francis Howard once argued in his brief and fascinating history of New Testament research, there is a genuine "romance of New Testament scholarship," and many of us are delighted to have the adventure continue in the speculative imaginations of capable novelists. These books can both entertain and educate, and so will Secret Scrolls.