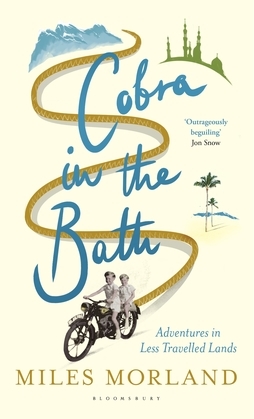 Cobra in the Bath

Miles Morland is an adventurer. He was born in India to a naval father and a dangerously glamorous mother. When his parents divorced, Miles followed his mother to Tehran, which they had to leave in a hurry, and on to Baghdad, which they also had to leave in a hurry after the 1958 revolution. His early years were filled with desert journeys, riots, perilous near-misses, and adventures worthy of Kipling, after which he was sent to England for a 'proper' education.

Later, following years of shouting down a Wall Street telephone, Miles threw in his job, bought a giant motorbike and set off to discover things in places others did not want to go. Deported at gunpoint from Romania, saved from assassination in Ethiopia by a lucky plane crash, riding an Enfield Bullet through Ooty and following Che over the Andes Â? Miles has a knack of finding trouble.

Brilliantly observed and told with unique humour, Cobra in the Bath will have you crying with laughter and scared out of your wits.