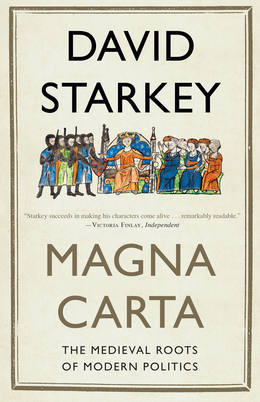 In this erudite, entertaining book, award-winning historian and television presenter David Starkey untangles historical and modern misconceptions about one of the founding documents of democracy. Along the way, he shows how the Magna Carta laid the foundation for the British constitution, influenced the American Revolution and the U.S. constitution, and continues to shape jurisprudential thinking about individual rights around the world today.

In 1215, King John I of England faced a domestic crisis. He had just lost an expensive campaign to retake his ancestral lands in France, an unfortunate adventure that he had funded by heavily taxing the baronial lords of England. Sick of the unpopular king's heavy-handed rule, and unimpressed by the king's unsuccessful attempt to seize Normandy, the feudal barons united to make demands of their sovereign for certain protections. These demands, the "Articles of the Barons," were submitted to the king in rough draft after the rebels occupied three cities, most significantly London.

A few years later, after being edited and amplified by the then-Archbishop of Canterbury, the Articles would come to be known as the Magna Carta. The self-interested barons couldn't have known it at the time, but those demands would one day become the bedrock of democratic political development around the globe--even though that influence was largely due to mythologizing by later scholars who warped the symbolism of the document to support their arguments in favor of the rights of all citizens.

Although the Magna Carta itself made no requests on behalf of the peasantry, in its structure the outlines of modern democratic reform are plainly visible. Among other things, it demanded limits on the ability of the crown to levy taxes; protection of the rights of the church; the guarantee of swift justice; and a ban on unjust imprisonment. Those protections and guarantees were strictly intended for benefit of feudal barons, but the free citizens of today's democratic nations owe an enormous debt to this history-changing document.