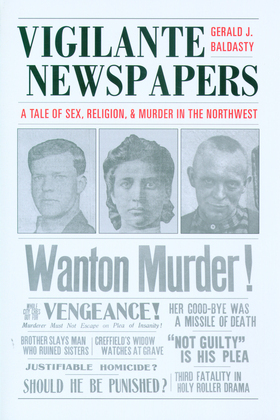 Vigilante Newspapers: Tales of sex, religion, and murder in the northwest

This riveting work of social history documents the role the news media played in spurring two murders revolving around Edmund Creffield, a charismatic "Holy Roller" evangelist who arrived in Corvallis, Oregon, in 1903 and quickly enraged the citizenry by defiantly challenging the religious and sexual mores of the time. When ardent female followers began refusing to speak to their nonbelieving husbands, vigilantes tarred and feathered Creffield, eventually forcing him to flee to Seattle.

Once there, Creffield was murdered by George Mitchell, the brother of one of his followers. The news media in Seattle and Oregon applauded George's defense of his sister Esther's honor, influencing the jury. Citing temporary insanity, the jury quickly acquitted George, pleasing the cheering crowds and the approving media. As George prepared to return to Oregon, however, Esther shot him point-blank at Union Station and another moralizing media frenzy broke out. Esther was sent to Western State Hospital and committed suicide after her release. Her short life was among the most poignant of the dozens wrecked by the controversy.

Gerald Baldasty's examination of Seattle and Oregon media coverage shows the tenacity with which frontier media protected traditional mores, particularly the notion that men are responsible for women's purity and have the right to take action if they feel another man has besmirched a woman's honor. Expertly crafted in a brisk, accessible style, Vigilante Newspapers illustrates through the tragic tale of Edmund Creffield, George Mitchell, and Esther Mitchell how the news media defined social deviance using vague concepts such as hysteria and temporary insanity, vigorously defending the established order of religious, class, and gender norms.