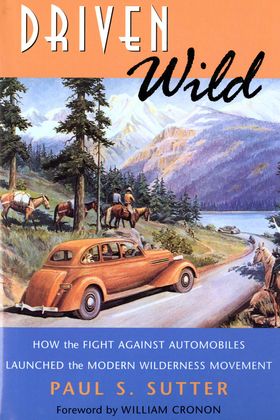 Driven Wild: How the Fight against Automobiles Launched the Modern Wilderness Movement

In its infancy, the movement to protect wilderness areas in the United States was motivated less by perceived threats from industrial and agricultural activities than by concern over the impacts of automobile owners seeking recreational opportunities in wild areas. Countless commercial and government purveyors vigorously promoted the mystique of travel to breathtakingly scenic places, and roads and highways were built to facilitate such travel. By the early 1930s, New Deal public works programs brought these trends to a startling crescendo. The dilemma faced by stewards of the nation's public lands was how to protect the wild qualities of those places while accommodating, and often encouraging, automobile-based tourism. By 1935, the founders of the Wilderness Society had become convinced of the impossibility of doing both.

In Driven Wild, Paul Sutter traces the intellectual and cultural roots of the modern wilderness movement from about 1910 through the 1930s, with tightly drawn portraits of four Wilderness Society founders--Aldo Leopold, Robert Sterling Yard, Benton MacKaye, and Bob Marshall. Each man brought a different background and perspective to the advocacy for wilderness preservation, yet each was spurred by a fear of what growing numbers of automobiles, aggressive road building, and the meteoric increase in Americans turning to nature for their leisure would do to the country�s wild places. As Sutter discovered, the founders of the Wilderness Society were "driven wild"--pushed by a rapidly changing country to construct a new preservationist ideal.

Sutter demonstrates that the birth of the movement to protect wilderness areas reflected a growing belief among an important group of conservationists that the modern forces of capitalism, industrialism, urbanism, and mass consumer culture were gradually eroding not just the ecology of North America, but crucial American values as well. For them, wilderness stood for something deeply sacred that was in danger of being lost, so that the movement to protect it was about saving not just wild nature, but ourselves as well.