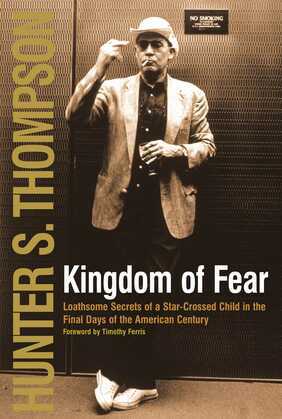 The Gonzo memoir from one of the most influential voices in American literature, Kingdom of Fear traces the course of Hunter S. Thompson?s life as a rebel?from a smart-mouthed Kentucky kid flaunting all authority to a convention-defying journalist who came to personify a wild fusion of fact, fiction, and mind-altering substances.

Brilliant, provocative, outrageous, and brazen, Hunter S. Thompson's infamous rule breaking?in his journalism, in his life, and under the law?changed the shape of American letters, and the face of American icons.

Call it the evolution of an outlaw. Here are the formative experiences that comprise Thompson?s legendary trajectory alongside the weird and the ugly. Whether detailing his exploits as a foreign correspondent in Rio, his job as night manager of the notorious O?Farrell Theatre in San Francisco, his epic run for sheriff of Aspen on the Freak Power ticket, or the sensational legal maneuvering that led to his full acquittal in the famous 99 Days trial, Thompson is at the peak of his narrative powers in Kingdom of Fear. And this boisterous, blistering ride illuminates as never before the professional and ideological risk taking of a literary genius and transgressive icon.