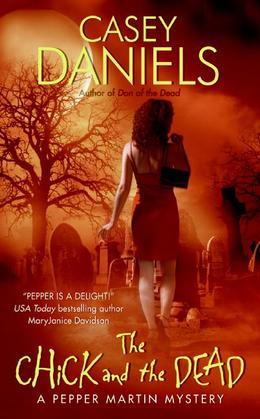 The Chick and the Dead

Ever since the former rich girl-turned-Cleveland cemetery tour guide banged her head on a headstone, she sees dead people. Worse still, she hears them—and they won't shut up! Now it's Didi Bowman, a poodle-skirted relic from the Great Beyond, who's bending Pepper's ear, complaining that her famous author sister, Merilee, has done her wrong. Trouble is, if Pepper proves it, she'll break the hearts of millions of Merilee's fans. And if she doesn't, Didi's ghost may never go away.

Pepper needs peace and quiet (and rent money), so the cash-strapped ex-heiress agrees to take a job as Merilee's secretary and dig around the family tree. But when she unearths more than she bargained for—like an illegitimate daughter, a bunch of illicit love affairs, and a possible murder—suddenly a very poisoned pen is all set to write Pepper out of the story permanently.