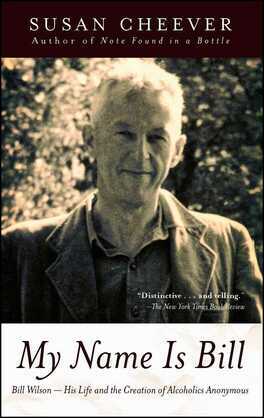 My Name Is Bill: Bill Wilson--His Life and the Creation of Alcoholics Anonymous

In this thoroughly researched and groundbreaking biography of Bill Wilson, cofounder of Alcoholics Anonymous, acclaimed author Susan Cheever creates a remarkably human portrait of a man whose life and work both influenced and saved the lives of millions of people. Drawn from personal letters and diaries, records in a variety of archives, and hundreds of interviews, this definitive biography is the first fully documented account of Bill Wilson's life story.

Alcoholics Anonymous is a worldwide organization that since 1935 has helped people break free from the destructive influence of intoxicating and addictive substances. This great wave of comfort and help that has covered the world had its beginning in one man, born shortly before the start of the twentieth century. Utilizing exhaustive research, Cheever traces Bill Wilson's life beginning with his birth in a small town in Vermont, where, following the breakup of his parents' marriage, he was raised primarily by his grandparents. Handsome and intelligent, with a wit and charm that both women and men responded to, he seemed at the outset to be capable of achieving anything he wanted.

Wilson, however, also suffered from deep-seated insecurity, and once he was away from the provincial Vermont town, he found that alcohol helped relieve his self-doubts and brought out the charm and wit that had made him a favorite in school.

"Help" eventually turned to dependence, and years after his first beer -- consumed at a Newport, Rhode Island, dinner party -- Bill Wilson finally had to come to terms with the fact that, while he loved the way alcohol made him feel, his life was spiraling out of control. Through a painful process of trial and error, using a blend of experiences, ideas, and medical knowledge gained through several hospitalizations, he was able to stop drinking. A few months later, when he met Dr. Robert Smith of Akron, Ohio, and was able to help him stop drinking also, Alcoholics Anonymous was born. Each man found in the other the support he needed to overcome the hold alcohol had on them. Together they discovered the power they had to help other alcoholics.

Success did not come overnight, however, and as Cheever compellingly relates, Wilson had many struggles in a life fraught with controversies, including experiments with LSD and an unconventional fifty-three-year marriage.

As one of the most influential and important thinkers of the twentieth century, Bill Wilson changed the way our society deals with addiction, and his ideas in turn have benefited countless individuals and their families. His life was complex, and in Susan Cheever's fascinating biography, he emerges as a man of great passion and courage; it is a story fully told for the first time.