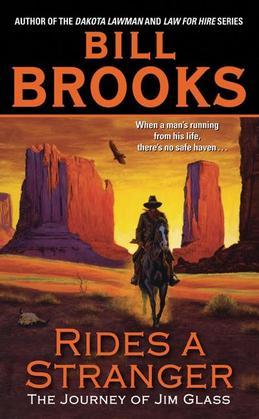 by Bill Brooks (Author)
Fiction Westerns
EPUB
26 Loans, One at a time
Details

From acclaimed Western author Bill Brooks, the first two books of his captivating “The Journey of Jim Glass” trilogy, now collected in one volume for the first time

Coffin Flats, New Mexico, is a nothing town in the middle of nowhere—which suits Jim Glass just fine. Looking for any job, he’s courted by the local brothel owner—because Jim is good with his fists as well as his gun—but instead he is hired by Marshal Chalk Bronson. A hothead named Johnny Waco is threatening to burn Coffin Flats down if his runaway wife isn’t returned to him. Now Glass has a plan that could either make things right or pull the drifter into a world of killers and heartbreak.

A BULLET FOR BILLY

Captain Gus Rodgers of the Texas Rangers is dying—and before he goes, he needs Jim Glass’s help to free his grandson from a Mexican prison. Trouble is, the Federale general holding him wants the head of the boy’s brother, Billy, who has already confessed to murdering the general’s daughter. Gus believes Billy deserves to die. The old ranger is just worried he won’t live long enough to do the deed—which is where Jim Glass comes in.