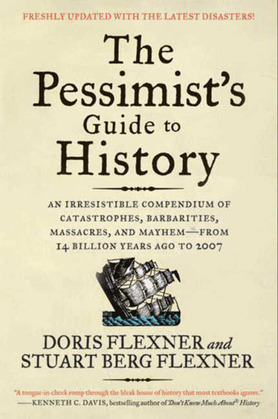 The Pessimist's Guide to History 3e

The classic irreverent look at the past—now updated with even more appalling facts!

Fourteen billion or so years ago, the Big Bang exploded—and it's been downhill from there. For every spectacular discovery throughout history, there have been hundreds of devastating epidemics; for every benevolent despot, a thousand like Vlad the Impaler; for every cup half-full, a larger cup half-empty. This enthralling, enlightening, and devilishly entertaining chronicle of disasters and dastardly deeds brings to light the darkest events in history and the most abysmal calamities to strike the planet . . . so far.

88 BC: Mithridates VI Eupator provides an early example of genocide by massacring 100,000 Romans.

1347: Saint Vitus' Dance Epidemic shimmies across Europe like a deadly disco fever, leaving its victims twitching, uncontrollably leaping, and foaming at the mouth.

1888: Jack the Ripper stalks through the dark alleys of Whitechapel, England, turning the world's oldest profession into the world's most dangerous one.

1939: A Swiss chemist wins a Nobel Prize for developing DDT—and the environment gets another nail in the coffin.