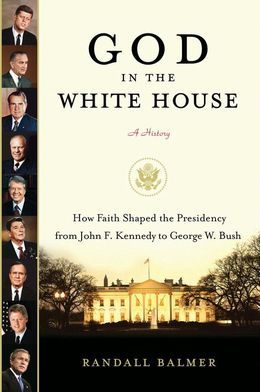 God in the White House: A History

by Randall Balmer (Author)
Non-Fiction Religion Religion and Society
EPUB
26 Loans, One at a time
Details

How did we go from John F. Kennedy declaring that religion should play no role in the elections to Bush saying, "I believe that God wants me to be president"?

Historian Randall Balmer takes us on a tour of presidential religiosity in the last half of the twentieth century—from Kennedy's 1960 speech that proposed an almost absolute wall between American political and religious life to the soft religiosity of Lyndon B. Johnson's Great Society; from Richard Nixon's manipulation of religion to fit his own needs to Gerald Ford's quiet stoicism; from Jimmy Carter's introduction of evangelicalism into the mainstream to Ronald Reagan's co-option of the same group; from Bill Clinton's covert way of turning religion into a non-issue to George W. Bush's overt Christian messages, Balmer reveals the role religion has played in the personal and political lives of these American presidents.

Americans were once content to disregard religion as a criterion for voting, as in most of the modern presidential elections before Jimmy Carter.But today's voters have come to expect candidates to fully disclose their religious views and to deeply illustrate their personal relationship to the Almighty. God in the White House explores the paradox of Americans' expectation that presidents should simultaneously trumpet their religious views and relationship to God while supporting the separation of church and state. Balmer tells the story of the politicization of religion in the last half of the twentieth century, as well as the "religionization" of our politics. He reflects on the implications of this shift, which have reverberated in both our religious and political worlds, and offers a new lens through which to see not only these extraordinary individuals, but also our current political situation.