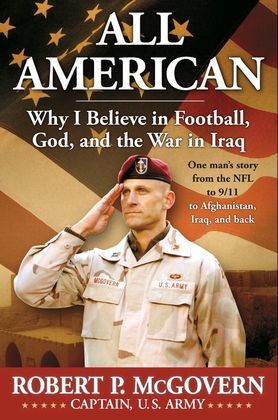 Captain Robert McGovern epitomizes all that is right and good in America. One of nine children growing up in a New Jersey family, he made local headlines as a high school football phenom before becoming a star linebacker for the Kansas City Chiefs, the Pittsburgh Steelers, and the New England Patriots. When his illustrious NFL career was over, he earned a law degree from Fordham University and went to work for the New York City district attorney's office. From that vantage point he witnessed close-up the fall of the Twin Towers on that world-altering morning in September 2001—an event that inspired him to leave public life and join the U.S. Army to better serve the country he loves.

As a military prosecuting attorney, Captain McGovern has advised battlefield commanders on legal rules of engagement in Afghanistan and has prosecuted suspected terrorists in Iraq. A dedicated soldier and a man of faith who has been on the front lines of the War on Terror—both at home and in the Middle East—Captain Robert McGovern is an extraordinary American with a remarkable and important story to tell—one that every American needs to hear.