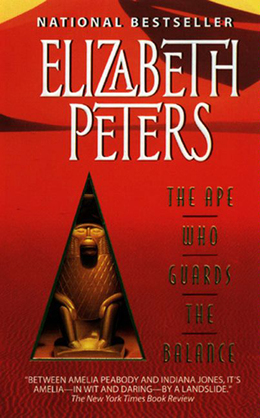 The Ape Who Guards the Balance

After eluding a kidnapper in London, an unperturbed Amelia Peabody accompanies her unconventional family to Cairo once more—only to be ensnared almost immediately in a web of stolen treasures and bloodthirsty cults. Villainy is running rampant in Egypt this 1907 archaeological season, but the members of the intrepid Peabody-Emerson clan have already proven themselves to be formidable adversaries. However, when a mint-condition papyrus of the Book of the Dead falls into their hands, and the corpse of an unscrupulous dealer in stolen antiquities is found floating in the Nile, the Emersons' prospects for surviving this excavation season unscathed appear increasingly dim.