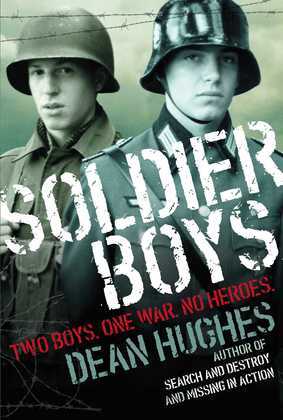 Spencer Morgan And Dieter Hedrick, one American, one German, are both young and eager to get into action in the war. Dieter, a shining member of the Hitler Youth movement, has actually met the Führer himself and was praised for his hard work. Now he is determined to make it to the front lines, to push back the enemy and defend the honor of the Fatherland.

Spencer, just sixteen, must convince his father to sign his induction papers. He is bent on becoming a paratrooper -- the toughest soldiers in the world. He will prove to his family and hometown friends that he is more than the little guy with crooked teeth. He?ll prove to his father that he can amount to something and keep his promises. Everyone will look at him differently when he returns home in his uniform, trousers tucked into his boots in the paratrooper style.

Both boys get their wishes when they are tossed into intense conflict during the Battle of the Bulge. And both soon learn that war is about a lot more than proving oneself and one?s bravery. Dean Hughes offers young readers a wrenching look at parallel lives and how innocence must eventually be shed.