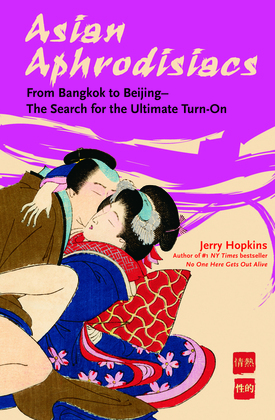 Asian Aphrodisiacs: From Bangkok to Beijing - The Search for the Ultimate Turn-on

by Jerry Hopkins (Author)
Nonfiction Travel Asia
"Tiger penis soup? Rhino horn on the oyster half shell? Give me a break!" So says bestselling author Jerry Hopkins as he meets the people, visits the places, and "road tests" dozens of Asia's most popular aphrodisiacs in the first definitive survey of the region's best and worst "turn-on's."

Expanding the usual definition to include lotions as well as potions, sex toys and aromatherapy, music and massage, exotic Asian belief systems, pornography and a variety of surgical procedures, he travels from his home in Bangkok to Tokyo, Jakarta, Hong Kong and Kathmandu in search of the region's most exciting pick-me-ups. Along the way, he discovers that Asia was first in the development and prescription of aphrodisiacs, first in pornography and sex toys, and first in breast and penis enhancement surgery.

In this exhaustively researched and often hilarious investigation of a subject that has held the world enthralled for thousands of years, the author discovers that Asia has been-and still is-in the lead when it comes to the promise of sexual enhancement. And to his surprise, he also finds several things that work.