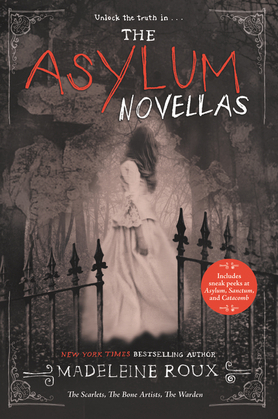 Three chilling novellas set in the world of the New York Times bestselling novel Asylum, which Publishers Weekly called "a strong YA debut." For the first time, these three terrifying stories will appear together with new found photographs perfect for new readers or diehard series fans looking for new clues and insights into the thrilling world of Asylum. This collection also features bonus sneak peeks at Asylum, Sanctum, and Catacomb, the novels that first introduced the Brookline asylum's legacy of terror.

In The Scarlets, Cal is drawn into New Hampshire College's twisted secret society—one with a deadly initiation.

In The Bone Artists, Oliver tries to make a little extra money for college by working for a seedy organization that traffics in human bones.

In The Warden, a young nurse starts a new job at the Brookline asylum but soon becomes suspicious of its unorthodox procedures. . . .