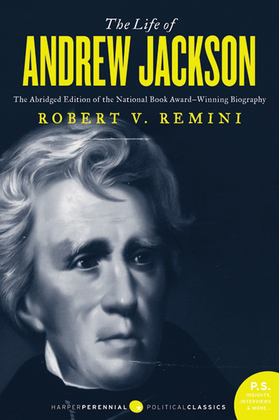 The Life of Andrew Jackson

Robert V. Remini's prize-winning, three-volume biography Life of Andrew Jackson won the National Book Award on its completion in 1984 and is recognized as one of the greatest lives of a U.S. President. In this meticulously crafted single-volume abridgment, Remini captures the essence of the life and career of the seventh president of the United States. As president, from 1829-1837, Jackson was a significant force in the nations's expansion, the growth of presidential power, and the transition from republicanism to democracy.

Jackson is a highly controversial figure who is undergoing historical reconsideration today. He is known as spurring the emergence of the modern American political division of Republican and Democractic parties, for the infamous Indian removal on the Trail of Tears, and for his brave victory against the British as Major General at the Battle of New Orleans.

Never an apologist, Remini portrays Jackson as a foreceful, sometimes tragic, hero--a man whose strength and flaws were larger than life, a president whose conviction provided the nation with one of the most influential, colorful, and controversial administrations in our history.