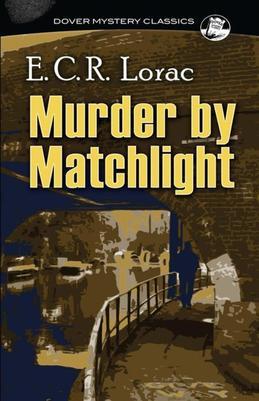 On a damp November evening in wartime London, a young chemist sits on a bench in Regent's Park and watches as an approaching stranger suddenly disappears beneath a footbridge. Seconds later another figure appears on the same overpass, stops to smoke and discard a cigarette, and strikes a match that briefly illuminates a face beyond his own. Through the succeeding darkness come the sounds of a thud and a falling body — then silence.Thus begins this chilling mystery from the Golden Age of Detective Fiction by Edith Caroline Rivett, author of more than seventy books written under the pseudonyms of E. C. R. Lorac and Carol Carnac. Murder by Matchlight features Scotland Yard's imperturbable Chief Inspector Robert Macdonald, who is tasked with finding the killer of the man on the bridge. His only evidence: a set of bicycle tracks that come to an abrupt end. His suspects: a colorful cast that includes the shy, soft-spoken witness, a respected London physician, a screenwriter, an unemployed laborer, and a vaudevillian specializing in illusions — a lively group whose questionable activities will keep readers guessing until the final twist and turn of this deftly plotted whodunit.