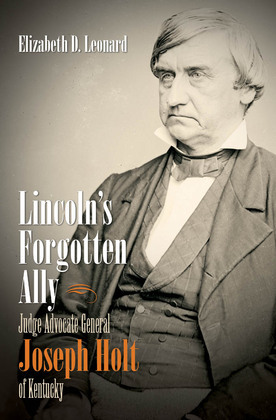 Joseph Holt, the stern, brilliant, and deeply committed Unionist from Kentucky, spent the first several months of the American Civil War successfully laboring to maintain Kentucky's loyalty to the Union and then went on to serve as President Lincoln's judge advocate general. In Lincoln's Forgotten Ally, Elizabeth Leonard offers the first full-scale biography of Holt, who has long been overlooked and misunderstood by historians and students of the war.

In his capacity as the administration's chief arbiter and enforcer of military law, Holt strove tenaciously, often against strong resistance, to implement Lincoln's wartime policies, including emancipation. After Lincoln's assassination, Holt accepted responsibility for pursuing and bringing to justice everyone involved in John Wilkes Booth's conspiracy. It was because of this role, in which he is often portrayed as a brutal prosecutor, and because of his hard position toward the South, Leonard contends, that Holt's reputation suffered. Leonard argues, however, that Holt should not be defined by what Southern sympathizers and proponents of the Lost Cause came to think of him. Lincoln's Forgotten Ally seeks to restore Holt, who dedicated both his energy and his influence to ensuring that the Federal victory would bring about lasting positive change for the nation, to his rightful place in American memory.