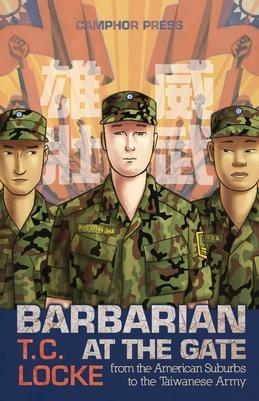 Barbarian at the Gate: From the American Suburbs to the Taiwanese Army

Barbarian at the Gate: From the American Suburbs to the Taiwanese Army is the unique account of a white American doing military service in the ROC (Republic of China) army. Locke fell in love with Taiwan during a year of language study and decided to make the island his home. Acquiring Taiwanese citizenship as a way to make life easier proved anything but. The bureaucratic nightmare found him trapped and stateless in Hong Kong for six long months, and after settling into life in Taiwan he received a surprise call-up for military service. It was a daunting challenge for the perennial outsider, the softly-spoken introvert needing to conform to military life in a setting - where as the only westerner - he was the ultimate odd-man-out. After basic training at the country's toughest boot camp he served the rest of his two years' at a mountain base in Miaoli County. Barbarian at the Gate is a detailed and brutally honest insider's look at Taiwan's military, and also the personal story of the search for identity and the struggle to assimilate. Locke describes the nerve-wracking lottery system, the rigors of training, his assignments ranging from running a karaoke bar for officers to slaughtering diseased pigs, the camaraderie of the barracks, and how - unexpectedly - he developed a deeper sense of belonging and acceptance than he ever had before. The book is an intimate portrait of an important part of Taiwanese life that has never been written about in English before. Military service is for many Taiwanese males the most memorable experience of their lives, a difficult rite of passage into manhood that is remembered with dread and nostalgia, and so it proved for Locke.