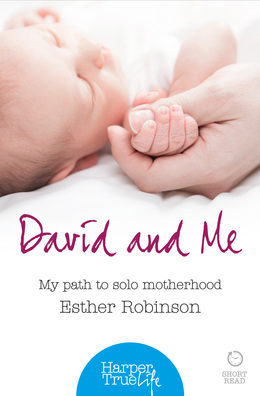 David and Me: My path to solo motherhood (HarperTrue Life – A Short Read)

“This is the very beginning of the story of my life with my son. In some ways it is an unconventional one; a tale of choosing solo motherhood, with all its painful and joyful twists and turns. But at its heart it simply recounts a mother’s love for her child; a love that has been replicated throughout time all over the world.”

The true story of Esther, who, at the age of 42, found herself single yet longing to be a mother.

Flying in the face of the advice and scaremongering from the media, she made the brave decision to go it alone.

Initially, the path was smooth, and Esther received nothing but encouragement and support from family and friends. But, as she ventured further down the path towards solo motherhood, Esther began to run up against bureaucracy, crushing negativity, obstructions and, occasionally, in amongst the care and compassion of doctors, nurses, embryologists and sonographers, bewildering incompetence.

From IUI to IVF, dramatic hormonal fluctuations creating frustration and exhaustion, and a devastating blow, through to the joy of motherhood at last, Esther’s story is both moving and life-affirming.