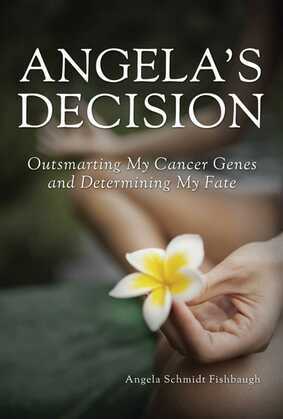 One woman?s brave journey to take control of her life, health, and future.

After a routine pap smear in 2009, Angela Schmidt Fishbaugh discovered that she had tested positive for BRCA1, a genetic trait that predisposed her to breast and ovarian cancer. After her initial shockand subsequent to consulting with medical professionals, friends, and familythe proactive mother and teacher embarked on a mission to nip the issue at the bud.

Angela?s story is one of personal fortitude. During her journey, she contended with a lack of understanding from those around her, as well as the impending loss of her most feminine qualities. However, as is made abundantly clear in Angela?s Decision, she persevered and came out a stronger woman, immensely proud of the decisions she made. The roots of her immense personal strength become evident as Angela offers flashbacks to her past. She shows us the great difficulties she faced while caring for her ailing father and, later, her ailing mother.

Written with unbridled candor and lively prose, Angela?s Decision follows Angela?s yearlong journey through a myriad of clinics, hospitals, and numerous operations. It is a story of struggle and trial, highlighting the challenges both she and her family faced in her crusade against her genetic condition, and the great courage she showed in ensuring the mistakes of her parents did not become her own.