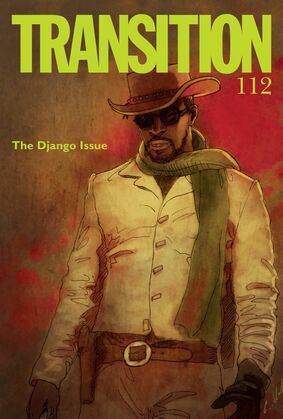 Transition 112: Transition: The Magazine of Africa and the Diaspora

Published three times per year by Indiana University Press for the Hutchins Center at Harvard University, Transition is a unique forum for the freshest, most compelling ideas from and about the black world. Since its founding in Uganda in 1961, the magazine has kept apace of the rapid transformation of the African Diaspora and has remained a leading forum of intellectual debate. In issue 112, the editors of Transition look at violence, particularly as it relates to the history of slavery, which raises the question of representation. Textbooks and television both grapple with the same fundamental questions: to whom do the stories of slaves belong? How should these stories be told? In this issue, Daniel Itzkovitz talks with Tony Kushner about the controversy that surrounded the making of Lincoln, a serious and sober film about the passage of the 13th Amendment. Django Unchained covers the same time period but uses a wildly different lens. The film is terrifying and topsy-turvy, and has ignited controversy that became a white-hot conflagration. Henry Louis Gates, Jr. speaks with Quentin Tarantino about the making of his film, and a host of scholars and critics, including Walter Johnson, Glenda Carpio, and Terri Francis, set the issue ablaze with provocative and searing commentary that speaks to the controversial film and its potent afterlife.