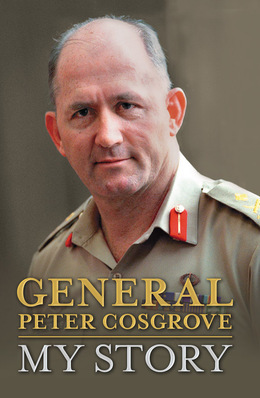 by Peter Cosgrove (Author)
EPUB
26 loans, One at a time
Details

The best-selling autobiography of Australia's favourite military leader and Australia's newest Governor-General. the best-selling autobiography of Australia's favourite military leader and Australia's newest Governor-General. 'this book is my personal story, from boyhood to battlefield and beyond, written in my own words, reflecting on my life.' In 1999, General Peter Cosgrove was thrust into the full glare of the nation's spotlight following his appointment as Commander of the International Forces in East timor (INtERFEt). Always in his slouch hat, he was a reassuring figure and we watched with pride the professionalism and concern of our peacekeeping forces who under his direction helped lay the foundations of a new nation. In his subsequent rise to Chief of the Army and then, in July 2002, to Chief of the Defence Force, the General cemented his reputation as a modern-day warrior chieftain as he displayed those characteristics we value most as Australians - strength, determination, intelligence, compassion and humour. In these memoirs, Peter Cosgrove writes colourfully of his early years and the influences that shaped him before deciding on a military career. We follow him from raw recruit at Duntroon to early duty in Malaysia and then Vietnam, where he won the Military Cross, through to major events in recent times, including 9/11, the 'children overboard' issue, the liberation of East timor and the conflict in Iraq. General Cosgrove is not a man who flinches from telling it how it was. the former Australian of the Year looks back over his respected and decorated military career with wit and warmth on top of the steel that made him one of Australia's most popular and widely recognised military leaders. 'A fascinating read that puts flesh on the bones of recent, and not so recent, Australian military exploits and the politics that drove them.' the Examiner