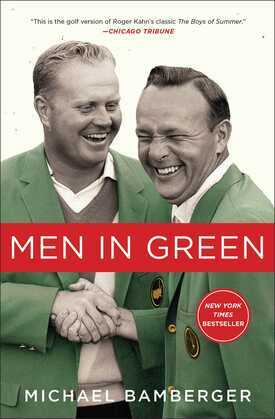 With ?exceptional insight into some of America?s greatest players over the last half-century? (The Philadelphia Inquirer), Men in Green is to golf what Roger Kahn?s The Boys of Summer was to baseball: a big-hearted account of the sport?s greats, from the household names to the private legends, those behind-the-curtain giants who never made the headlines.

Michael Bamberger, who has covered the game for twenty years at Sports Illustrated, shows us the big names as we?ve never seen them before: Arnold Palmer, Jack Nicklaus, Tom Watson, Curtis Strange, Fred Couples?and the late Ken Venturi. But he also chronicles the legendary figures known only to insiders, who nevertheless have left an indelible mark on the sport. There?s a club pro, a teaching pro, an old black Southern caddie. There?s a tournament director in his seventies, a TV director in his eighties, and a USGA executive in his nineties. All these figures, from the marquee names to the unknowns, have changed the game. What they all share is a game that courses through their collective veins like a drug.

Was golf better back in the day? Men in Green weaves a history of the modern game that is personal, touching, inviting, and new. This meditation on aging and a celebration of the game is ?a nostalgic visit and reminiscence with those who fashioned golf history?and should be cherished? (Golf Digest).