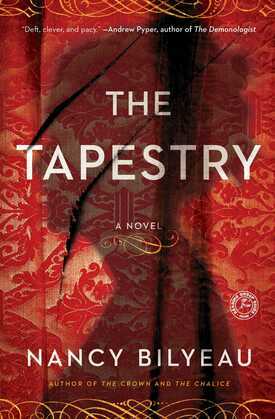 The next page-turner in the award-winning Joanna Stafford series takes place in the heart of the Tudor court, as she risks everything to defy the most powerful men of her era.

Henry VIII's Palace of Whitehall is the last place on earth Joanna Stafford wants to be. But a summons from the king cannot be refused.

After her priory was destroyed, Joanna, a young Dominican novice, vowed to live a quiet life, weaving tapestries and shunning dangerous conspiracies. That all changes when the king takes an interest in her tapestry talent.

With a ruthless monarch tiring of his fourth wife and amoral noblemen driven by hidden agendas, Joanna becomes entangled in Tudor court politics. Her close friend, Catherine Howard. is rumored to be the king's mistress, and Joanna is determined to protect her from becoming the king's next wife?and victim. All the while, Joanna tries to understand her feelings for the two men in her life: the constable who tried to save her and the friar she can't forget.

In a world of royal banquets, jousts, sea voyages and Tower Hill executions, Joanna must finally choose her future: nun or wife, spy or subject, rebel or courtier.

The Tapestry is the final book in a Tudor trilogy that began in 2012 with The Crown, an Oprah magazine pick. Don't miss the adventures of one of the most unforgettable heroines in historical fiction.