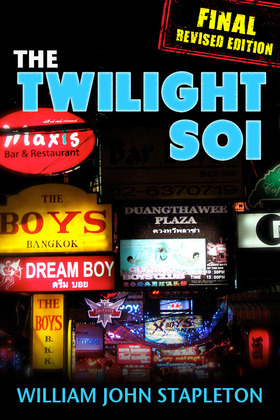 The Twilight Soi dwells on the dangers of one of the world's most beautiful and intoxicating cities, Bangkok. It is named after one of Bangkok's more infamous small streets, or sois as they are known.

Soi Twilight runs off the main thoroughfare of Surawong in the centre of Bangkok's oldest entertainment district Patpong and is known to travelers around the world. It is here where touts from go-go boy bars such as Ocean boys, Bangkok Boys and Classic Boys hustle for the attention of local and international tourists.

The Twilight Soi began in an angry place - over theft and deception. But applying Western, or in the author's case Australian, notions of loyalty, honesty, fairness, decency and an abhorrence of deceit do not apply in a country as profoundly different as Thailand. For historical reasons Australians intensely dislike personal treachery or the betrayal of friendship. Standing on these principles in a city like Bangkok marks you as a fool. Ultimately being angry both at your own foolhardiness and the actions of others embitters and harms yourself, no one else. This book ends with more understanding than it began.

Many of the problems experienced by foreigners in Thailand come from the extreme cultural differences with the West. In Australia a man's word is his honor. A liar is the lowest form of life. In Thailand only a foreigner would be so rude as to point out that the story told in the morning bears little or no resemblance to the story told in the afternoon.