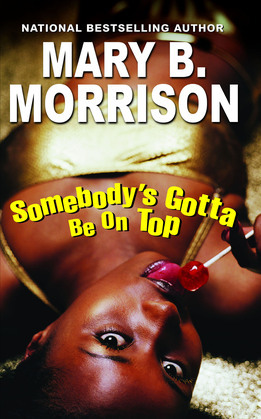 Somebody's Gotta Be On Top

So says Darius Jones. At just twenty-two, the baby boy has grown--bigger, taller, sexier, hotter--but he hasn't necessarily grown up. Maybe he isn't messing with the women on his mama's staff anymore, but he's still messing with people's lives and messing up his own. For Darius, "If it doesn't make money, it doesn't make sense." And that goes for women, too. Women are there to give him what he wants, the way he wants it. Not that he doesn't know how to pleasure a sister; he just doesn't want them telling him the way it's going to be. On anything. Ever. Including his mother. If his mother was a liar, then every other woman was, too. That's why he relocates from Washington, D.C. to Los Angeles, near his mama's business, where he sets up his own company, Somebody's Gotta Be on Top Enterprises. And it's no secret who that somebody's got to be. Now that Darius is all about the control--getting it, keeping it, and taking it away, if need be--he's sure he can apply that principle to finding "the one." But trying to be on top all the time only gets him into trouble with the women in his life, women like.  .  .

Ciara Monroe, president of a rival company. She's earned power and respect the hard way, but Darius isn't about to be outsmarted by her.  .  .not in bed and not in business. He's going after Ciara on a personal level, digging up the dirt on her past. It's a move that will cost him, and Ciara's not leaving before she confronts him about his feelings for Ashlee.  .  .

Ashlee Anderson is the stepsister who's more than just his friend. She's also the woman he loves and desires. When Darius convinces Ashlee to live with him and manage his finance department, he never expects her to fall for his half-brother, Kevin Williams. Darius will do anything to split them apart, even if it means risking his business. But there's one woman who's got Darius's number.  .  .

Fancy Taylor. With skin like brown sugar, and the bearing of a fine queen, Fancy definitely intrigues Darius. If he didn't have his heart set on conquering Ashlee no matter what, he'd enjoy sampling what the lady has to offer, but that's all. Fancy's a woman with a past that precludes her from being serious relationship material. But fate has a way of stepping in and putting the wrong people on the right path, if they're not too foolish to see it.  .  .

Still harboring the wounds of his mother's deception and a childhood without his biological father, caught between an all-consuming pride and the call of his own untrusting heart, Darius has a lot to learn: about life, women, and what it takes to find and nurture real love. And if he's not careful, he might just end up on the bottom of everything.