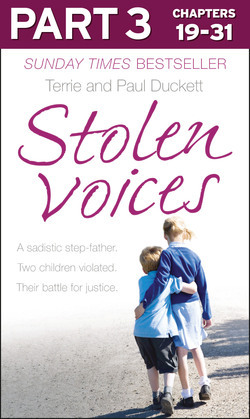 Stolen Voices can either be read as a full-length eBook or in 3 serialised eBook-only parts.

He beat them, he abused them, and he tortured them. He broke their dreams. But they came back stronger.

‘Terrie and Paul are two of the bravest people I have ever met. I have only shared the briefest glimpse into the true horrors this brother and sister have endured, but I rarely come across cases this bad. After the unspeakable abuse and shocking betrayals, two incredible human beings came through – to inspire us all.’
Sara Payne OBE, co-founder of Phoenix Survivors

Terrie and Paul’s step-father had been living with them for six months when the abuse and grooming began. What started as innocent conversations and goodnight kisses quickly developed into something far darker and depraved.

Everyday Terrie was assaulted and abused; her rapes were photographed, filmed and shared. Paul was regularly taunted and mercilessly beaten. But despite the bruises and the scars, and the desperate pleas for help, no one saw their pain.

But through it all they stuck together, battling for their childhoods for over a decade and masterminding creative ways to outwit their stepfather and buy themselves fleeting moments of joy.

In March 2013, thirty years on, Terrie and Paul made the brave decision to give up their right to anonymity to tell of the years of abuse they endured at the hands of their recently convicted step-father and raise awareness for the ongoing battle for justice for victims of child abuse. A powerful testament of what can be achieved through courage and love, this is their inspiring story.