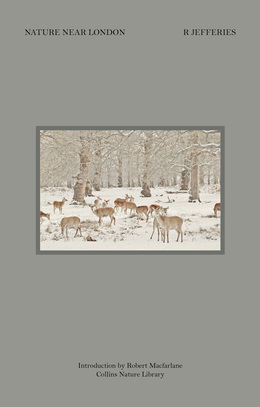 The Collins Nature Library is a new series of classic British nature writing – reissues of long-lost seminal works. The titles have been chosen by one of Britain’s best known and highly acclaimed nature writers, Robert Macfarlane, who has also written new introductions that put these classics into a modern context.

Nature Near London is a collection of observational pieces from locations near London at the end of the 19th Century. The depth of knowledge and of familiarity with particular places and particular species gives the impression that each small piece is the product of many years of observation.

His style of observation is a work in miniature – cataloguing the most minute details; the dancing of a flower in the wind or the darting of a cautious trout. The chapters centre on a special place, a certain species, geographical feature or habitat – everything from orchards and copses to rivers and streams.

Jefferies always explains the typical behaviour of whatever he is describing, and often contrasts what he sees with what one would expect to see in another part of the country, or in a different season. His knowledge of flowers is wide-ranging, and his ability to describe one particular patch of a field in such a specific way brings tremendous variety to the chapters that make up the book.

The final chapters are a departure – both from the character of the rest of the book, and from London itself, as Jefferies boards the train to Brighton. Suddenly he is describing people and their relationship to nature, as much as nature itself. The scope widens, less a work in miniature, more surging towards a triumphant end as Jefferies becomes ever more philosophical.

100 years on, the book becomes even more relevant than when it was published – as a reminder of the dangers of unrelenting urbanisation, but also the context of the trend that aims to recreate nature where we need it most – around our cities. Nature near London is a portrait of what we’ve lost, and a reminder of nature’s positive and calming influence. Going along with Jefferies is like taking an afternoon stroll out of the city, without having to leave your armchair.