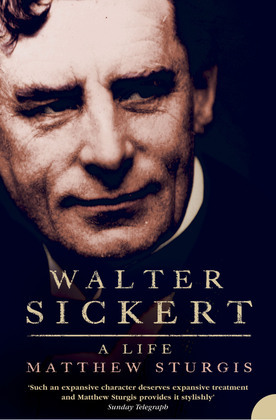 Walter Sickert: A Life (Text Only)

The first major life of the outstanding British painter – and Jack the Ripper suspect – Walter Sickert (1860-1942), by the highly acclaimed biographer of Aubrey Beardsley.

Walter Richard Sickert is perhaps the outstanding figure of British art during the last hundred years. Many contemporary painters, from Hodgkin and Bacon to Auerbach and Kossof, acknowledge a debt to his influence. His career spanned six decades of unceasing experiment and achievement. As a young artist, he was welcomed and encouraged by Degas. He was the disciple of Whistler and mentor of Beardsley. He founded the London Impressionists and the Camden Town Group. He was taken up by both the Woolfs and the Sitwells. He gave painting lessons to Winston Churchill.

His energy was prodigious and his personality fascinating: he was also an illustrator, cartoonist, writer, polemicist, teacher and wit. He relished controversy: his early paintings of London music halls and his late works, based on 18th-century etchings and contemporary news photographs, provoked outraged criticism from conventional commentators.

Sturgis also devotes an appendix to charting in detail Sickert's posthumous life as a player in the 'Jack the Ripper' circus, assessing (and demolishing) the arguments of Patricia Cornwell and others in the light of his own discoveries.