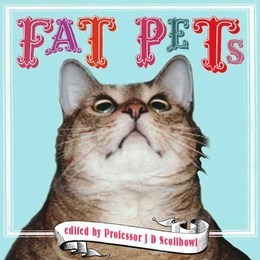 It’s the ideal Christmas gift – the first ever collection of pictures of the world’s fattest pets! Marvel at the supersized cats, dogs, rabbits and others to be found in this astounding and entertaining book. Will fit in most stockings.

These days, many pets eat a bit too much. Many of them also laze around all day doing nothing. But not all of them have what it takes to make it into this pictoral collection of the most impressively outsize pets ever to sit on a sofa.

Here, in ‘Fat Pets’, Professor J D Scoffbowl has assembled high-quality photographs of the world’s most generously proportioned family pets - many supplied by their owners - in honour of those magnificent , hungry animals.

For some of the porky pets in this book, a photograph is all that’s needed to record their unique achievement in the challenging field of expanding their girth and not doing a whole lot else.

But some of these pets have become famous for their gigantic proportions, and others just have quite a story, and in these instances, Scoffbowl briefly records the salient facts.

Readers will learn of Goliath, who hit the headlines after becoming stuck in a neighbour’s catflap while attemping to steal another cat’s lunch.

And Tiddles, the cat who lived in the ladies loo at Paddington Station and grew fat on treats provided by admiring travellers.

Plus there’s the story of Gizmo, the chihuahua who gained newspaper fame after becoming hooked on a diet of After Eight mints.