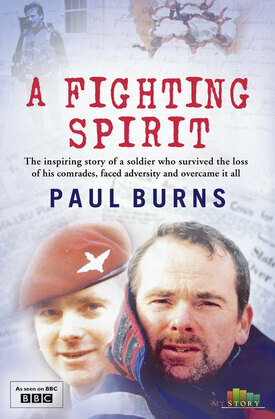 On 27 August 1979, Paul Burns's life changed for ever. Travelling through Warren Point in Northern Ireland when the IRA detonated two massive bombs, he was involved in a devastating explosion - eighteen soldiers were killed that day; Paul was one of only two who survived.

Newly recruited to the Parachute Regiment, Paul was performing a tour of duty in Northern Ireland when a four-tonne truck in which he was travelling was destroyed by a massive IRA bomb. Eighteen of his friends and colleagues were killed in the Warrenpoint blast – the biggest single loss of life for the British Army during the Troubles.

Paul barely survived. His body was broken. His left leg was amputated below the knee. His skin was burned down to the bone. Those who saw him wondered if it might not be kinder to let him die.

At just eighteen, Paul thought his life was over. But he refused to be beaten. He had made a promise to himself that he would make up for the loss of his friends' lives by living his own life to the full.

And just over five years later he was a member of the elite parachute display team, The Red Devils. In 1996 he entered the record books as a member of 'Time and Tide': the first ever disabled crew to sail around the world. Today he works as a disabled extra in tv and film – amongst his accolades he can count a role in Hollywood blockbuster Gladiator.
His story is a remarkable tale of one man's determination to make the most of his life against the odds.