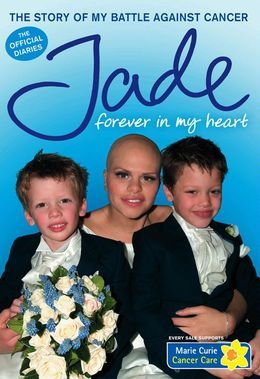 Forever in My Heart: The Story of My Battle Against Cancer

Jade's heart-breaking diary of her fight against terminal cancer and her final precious months with her beloved family.

In August 2007 Jade Goody received the shattering news that she had cervical cancer. She was only 27 years old. But with her usual strength of character, Jade was determined to beat the disease and carry on with life as normal with her two little boys Bobby and Freddy.

Neither the chemotherapy, which left her weak and bald, or the hysterectomy that crushed her dreams of having a little girl, could break Jade's sunny personality or her fierce refusal to be a victim. But in February 2009, Jade received the tragic news that any mother dreads to hear: she was going to be torn from her beloved sons. The cancer had spread and was untreatable.

Forever In My Heart is Jade's final 'love letter' to her two little boys. Covering her initial diagnosis while appearing on Celebrity Big Brother in India, their emotional last Christmas as a family, her magical wedding to her partner Jack Tweed and her dying wish to see be christened with her boys, Jade's heart-breaking diary of her final months is set against a backdrop of flashbacks to her difficult early years, her rise to fame in the Big Brother house and those moments of joy and laughter as the nation's darling.

It is the powerful story of a young mother's brave fight against a terminal disease, her unique humour, her determination to provide for her sons and her fierce desire to leave a legacy which might prevent other young women being torn from their families in the prime of life.

A percentage of profits from the book will be donated to Marie Curie Cancer Care.