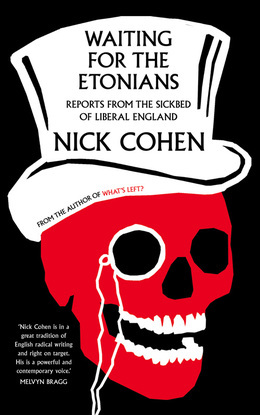 Waiting for the Etonians: Reports from the Sickbed of Liberal England

BY THE SUMMER of 2007, Britain was close to crashing. A few onlookers realised the danger, but Britain's political leaders were not among them. Politicians and civil servants boasted that the City's economy was booming because of their 'light-touch regulation' of workers in financial services whose number included potential frauds. Curiously, they never argued that the inner-city economy might boom if there was 'light touch regulation' of workers in the ghettos whose number included potential drug dealers.
And artists produced works to match the times. On the same day that Lehman Brothers went bankrupt, the genial Damien Hirst auctioned at Sotheby's pieces he admitted had been mass produced in his studios and buyers still gave him £100 million. Even the critics did not pretend to be interested in what message, if any, Hirst had for his audience, but reported the sale like business reporters covering a soaring stock.
For 10 years New Labour stood cross-eyed in admiration as London was turned into the centre of the financial universe. From the sand bags Nick Cohen has watched as they turned their back on the working class, once the object of Utopian hopes on the Left and unreasonable fears on the Right, and lovingly embraced the upper class, once the object of surly contempt on the Left. In Waiting for the Etonians are gathered his selected writings that cover the span of Labour's love affair with the Right and the moral hazard that it has culminated in. It is a romance which has not only broken its traditional bond with the working classes and undermined the very values on which the party was founded, but has now left it with little more to do than warm the seat for the next Conservative Prime Minister.