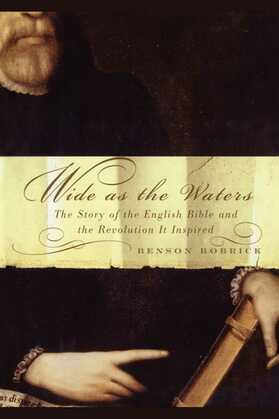 Wide As the Waters

Next to the Bible itself, the English Bible was -- and is -- the most influential book ever published. The most famous of all English Bibles, the King James Version, was the culmination of centuries of work by various translators, from John Wycliffe, the fourteenth-century catalyst of English Bible translation, to the committee of scholars who collaborated on the King James translation. Wide as the Waters examines the life and work of Wycliffe and recounts the tribulations of his successors, including William Tyndale, who was martyred, Miles Coverdale, and others who came to bitter ends. It traces the story of the English Bible through the tumultuous reigns of Henry VIII, Edward VI, Mary Tudor, and Elizabeth I, a time of fierce contest between Catholics and Protes-tants in England, as the struggle to establish a vernacular Bible was fought among competing factions. In the course of that struggle, Sir Thomas More, later made a Catholic saint, helped orchestrate the assault on the English Bible, only to find his own true faith the plaything of his king.

In 1604, a committee of fifty-four scholars, the flower of Oxford and Cambridge, collaborated on the new translation for King James. Their collective expertise in biblical languages and related fields has probably never been matched, and the translation they produced -- substantially based on the earlier work of Wycliffe, Tyndale, and others -- would shape English literature and speech for centuries. As the great English historian Macaulay wrote of their version, "If everything else in our language should perish, it alone would suffice to show the extent of its beauty and power." To this day its common expressions, such as "labor of love," "lick the dust," "a thorn in the flesh," "the root of all evil," "the fat of the land," "the sweat of thy brow," "to cast pearls before swine," and "the shadow of death," are heard in everyday speech.

The impact of the English Bible on law and society was profound. It gave every literate person access to the sacred text, which helped to foster the spirit of inquiry through reading and reflection. This, in turn, accelerated the growth of commercial printing and the proliferation of books. Once people were free to interpret the word of God according to the light of their own understanding, they began to question the authority of their inherited institutions, both religious and secular. This led to reformation within the Church, and to the rise of constitutional government in England and the end of the divine right of kings. England fought a Civil War in the light (and shadow) of such concepts, and by them confirmed the Glorious Revolution of 1688. In time, the new world of ideas that the English Bible helped inspire spread across the Atlantic to America, and eventually, like Wycliffe's sea-borne scattered ashes, all the world over, "as wide as the waters be."

Wide as the Waters is a story about a crucial epoch in the history of Christianity, about the English language and society, and about a book that changed the course of human events.