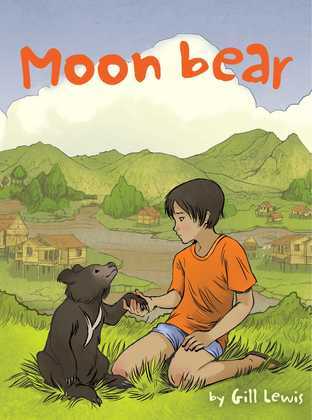 Both torn from their homes in Laos, a boy and a moon bear cub form a deep bond in this ?moving and memorable? (Kirkus Reviews, starred review) tale of impossible odds and resilient hope, based on true and tragic conditions in Eastern Asia.

Twelve-year-old Tam, on a dare, ventures into a moon bear den in the mountains of Northern Laos. His goal is to steal the cub and sell it, making a fortune for his family. But the mother bear?s unexpected return upends Tam?s plan, and he barely escapes with his life. Then his life implodes anyway: his entire mountain village is forced to relocate to make room for a new highway. Lured by the promise of electricity, running water, and a television, Tam?s people move to an overcrowded village, where Tam?s father is killed by a stray landmine.

Now the family breadwinner, Tam is forced to work hundreds of miles away in the city of Laos, at a moon bear farm where bile from bear gall bladders is used for medicine. It is a cruel, miserable place, and when a familiar face?the very cub he?d seen in the den in Vietnam?is sold to the bear farm, Tam knows he must save this moon bear, no matter what it takes.

Deeply and powerfully moving, Moon Bear is an unforgettable story of compassion, hope, and bravery against overwhelming odds, and brings to light the real-life, heartwrenching plight of Asia?s endangered moon bears.