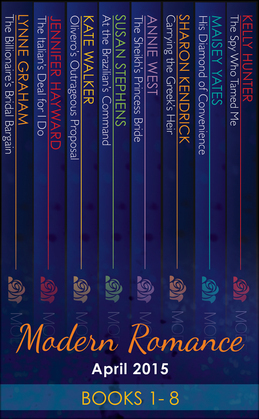 HIS DIAMOND OF CONVENIENCE by Maisey Yates

Twelve years ago, Victoria Calder made a mistake that cost her father his business. Now she plans to atone. And if that means going toe-to-toe with the arresting Dmitri Markin she's prepared to step into the ring!

Meeting Alekto Sarantos turned Ellie Brooks’ life upside down. Pregnant with the ruthless Greek's baby, Ellie has a husband she shouldn't desire. There’s only one reason she made a deal with this handsome devil: her baby, his heir…

For Dario Olivero, Alyse Gregory was supposed to be no more than a way to reap revenge. But when he finds out Alyse is pregnant and realises just how much trouble she’s in, he can’t turn away. Now, his convenient wife’s proximity only makes her harder to resist…

THE SPY WHO TAMED ME by Kelly Hunter

After two years undercover, Special Operative Jared West feels like a stranger in his old life. New Director of Operations, Rowan, must get to know Jared intimately to ensure he’s ready for his next mission. But neither are ready for the passion that erupts from the casual touch of a hand…

Ordinary girl Tally Spencer has nothing in common with Sander Volakis, an impossibly rich and handsome Greek entrepreneur—beyond an overwhelming sexual attraction. Yet, within weeks, the two are exchanging vows! What secrets lie behind their hasty marriage?

THE ITALIAN’S DEAL FOR I DO by Jennifer Hayward

To regain control of his fashion empire, Rocco Mondelli must prove his playboy days are over. Ex-supermodel Olivia Fitzgerald will play his loving fiancée! But as the heat between them intensifies, the line between real and fake blurs

AT THE BRAZILIAN’S COMMAND by Susan Stephens

Practical, poised Danny Cameron seems like the perfect wife to wealthy polo chamption Tiago Santos—she sees their partnership without any problematic illusions of romance. Yet, as their wedding night approaches, the attraction between them spirals beyond control…

Sheikh Tariq of Al-Sharath has no time—or wish—to find a bride, but his children need a mother. Princess Samira of Jazeer thought royal duties and her love for Tariq's children would fill the hole in her heart, but a craving is building that only the sheikh's touch can cure…