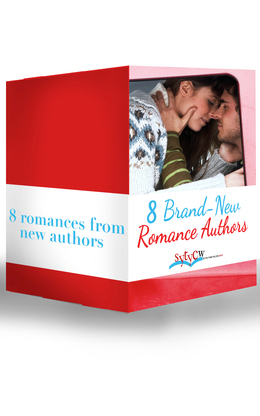 8 BRAND-NEW ROMANCE AUTHORS – Fantastic new talented writers discovered in the So You Think You Can Write? Competition

IF ONLY… by Tanya Wright

After one tequila too many Micah O’Shea is suddenly seeing the world – and her best friend, firefighter Josh Taylor – in a new light! Surely a bit of Dutch courage is all she needs to see if he tastes as good as he looks…?

A DEAL BEFORE THE ALTAR by Rachael Thomas

Georgina Henshaw will do anything to ensure her younger sister’s happiness—even marry the darkly enigmatic Santos Ramirez! She has just one condition: she’ll wear his ring, but she'll never share his bed!

FALLING FOR HER CAPTOR by Elisabeth HobbesKidnapped heiress Lady Aline of Leavingham has surrendered any hope of rescue when a mysterious figure casts her assailant aside. But it’s soon clear Aline’s saviour, Sir Hugh of Eardham has no intention of setting her free… Worse—he’s sworn to deliver her to her family's enemy!

Can organising her friend’s wedding be any harder?

Sunshine Smart has only got two months until the big day!

She has to include the grouchy, surly best man Leo Quartermaine—a top chef and her complete opposite!

Said best man is extremely handsome and sexy—and knows it!

Lone wolf Dr Tara Braxton is finally back on track running a ski injury clinic. But her peaceful existence ends when she hires Dr Fraser MacKenzie. With his haunted sapphire eyes he simultaneously weakens her knees and presses all the wrong buttons!

After a fling in Vegas that was so wild even she can’t believe it happened, copywriter Becky has finally got her mojo back. Time to get back to New York and win that promotion! But things veer catastrophically off course when her new co-worker Mark saunters in…and he’s much too familiar.

THE PIRATE HUNTER by Laura Martin

Shipwrecked off the coast of Barbados, pirate hunter William Greenacre is ready to surrender to the seductive pull of the sea when an angelic figure dives to his rescue. Except this angel is none other than Mia Del Torres—and she’s a wanted woman!

DRESSED TO THRILL by Bella Frances

Fashion designer Tara Devine is the poster girl for behaving badly. It’s a total sham, but she’s always pulled it off…until Michael Cruz saunters into her life! One wild night later Tara realises that Michael’s bed is the only place she hasn’t faked it in years…