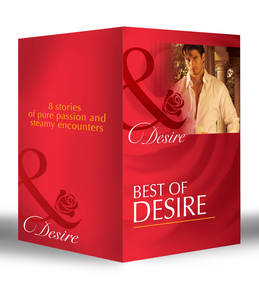 THE BEST OF DESIRE

Eight super Desire romances - with heroes that are to-die-for!

THE MAVERICK PRINCE by Catherine Mann

The world knew him only as Tony Medina, shipping magnate, lover of the finer things in life…including Shannon Crawford. And then his true identity was splashed across the tabloids

After a career of risk, Jericho King desired only a simple life…and the occasional no-strings affair. But then Daisy Saxon arrived; he’d pledged his help if ever she was in need.

Spanish billionaire Rodrigo Valderrama rushed to the side of the woman he’s always wanted the moment he learned of her accident. Whisking Cybele away to his palatial seafront estate, the wealthy surgeon vowed to care for the pregnant widow.

THE MILLIONAIRE MEETS HIS MATCH by Kate Carlisle

The CEO of Duke Development had been on guard since he discovered his mother’s diabolical plot to marry him off. And when his desirable new assistant, Trish James, hinted she wanted more than just a business relationship, Adam guessed she was in on the scheme…

Adam Blair, billionaire oil baron, wanted an heir, but he was determined to keep the arrangement strictly business. When Katy Huntly, his late wife’s sister, discovered his plan, she demanded to be the surrogate.

Billionaire businessman Jake Claiborne had got the enemy’s daughter pregnant! It had been sheer madness to bed Alicia Butler. But he would not walk away. Their only option was marriage…

Sexy as sin Luke Garnier wasn’t looking for a wife. Just an heir…with no strings attached. Persuading his faithful assistant, Haley Rollins, to be his surrogate seemed ideal. But Haley’s condition for having his baby was marriage!

MASTER OF FORTUNE by Katherine Garbera

If Henry Devonshire wished to inherit his dying father's empire, he had to make Everest Records a huge success. And the one person who could help him, Astrid Taylor, was also the only woman he wanted.